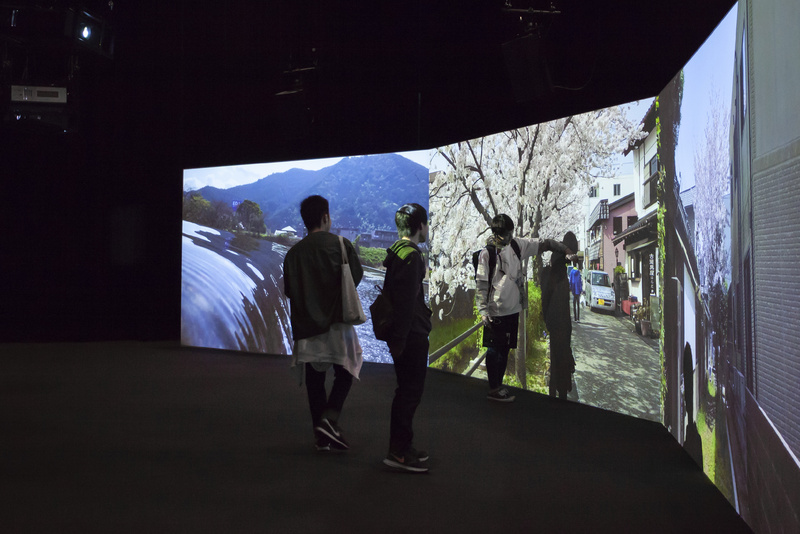 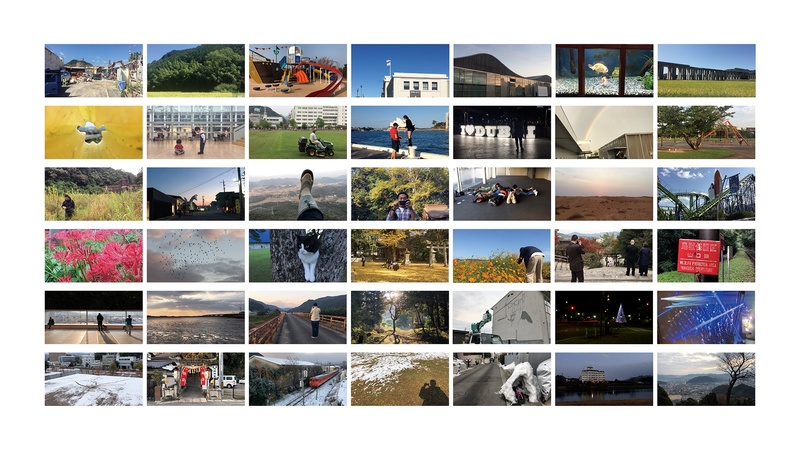 Unveiled in this exhibition as part of the “YCAM Film Factory vol.4” movie production program is a new installation co-produced by movie director Sho Miyake and YCAM.

Director Sho Miyake is primarily know for producing such feature-length movies as ”Yakutatazu (Good For Nothing)” (2010) and “Playback” (2012). In recent years he expanded the scope of his activities, making “Experience in Material No. 58 / A Return Of Bruno Taut 2016” (2016, co-directed by Ryoji Suzuki), a documentary on the work of architect Ryoji Suzuki, and accompanying rapper OMSB and his friends during the process of producing a new track in an apartment room, as captured in the film ”THE COCKPIT” (2015).
In 2017, YCAM and Miyake launched a project aiming to reexamine the essence of the “movie” medium in the present age, and explore future possibilities. Part of this long-term collaboration is the production of a new feature-length movie, in the process of which the installation piece “World Tour” was created.

“World Tour” consists of video diary type footage shot by Miyake during his stay in Yamaguchi between August 2017 and April 2018, using exclusively his smartphone’s camera, and images recorded in the same period by the YCAM staff and other non-professional collaborators. Miyake eventually edited both groups of material into a work that is shown on multiple screens.

The new installation piece that is presented here was inspired by the ”Mugon Nikki” (“wordless diary”), a video diary that Miyake has been working on since 2014. In the ”Mugon Nikki,” Miyake captures with his smartphone’s camera ”cinematic moments” he encounters in everyday life, which are continuously compiled and published to this day on the “boid magazine” website. In an age when anyone can easily make video recordings thanks to the spread of the smartphone, the realm of film and the real world in which we live have moved closer together. Seemingly in response to this changing environment, the filmmaker aims to discover little yet surprising new aspects in everyday life, and take a fresh look at the world from a new perspective through a new filmic experience in the form of videos accumulated in the ”Mugon Nikki.”
During his stay at YCAM, and concurrently with the production of the ”Mugon Nikki,” Miyake experimented with a movie production style that builds on the same method. The approach here was to compile material filmed in the same way as the ”Mugon Nikki” videos, yet not by Miyake himself, but by several other people. The result is an original set of images slightly different from those in the ”Mugon Nikki,” representing neither the viewpoint of the filmmaker, nor that of the editor (Miyake), but observing the world in a unique way from ”a perspective that doesn’t belong to any particular individual.”

This installation is made up of images related to the ”Mugon Nikki,” filmed by Miyake himself and a number of contributors. Shot over a period of more than half a year, these videos lavishly frame a variety of hidden yet fruitful moments in everyday life, while at once encapsulating the seasonal transitions from summer to winter, spring, and summer again. Visitors to this installation will experience a new perspective for taking a fresh look at the world, and discover new sceneries from the memories of others that have already vanished.