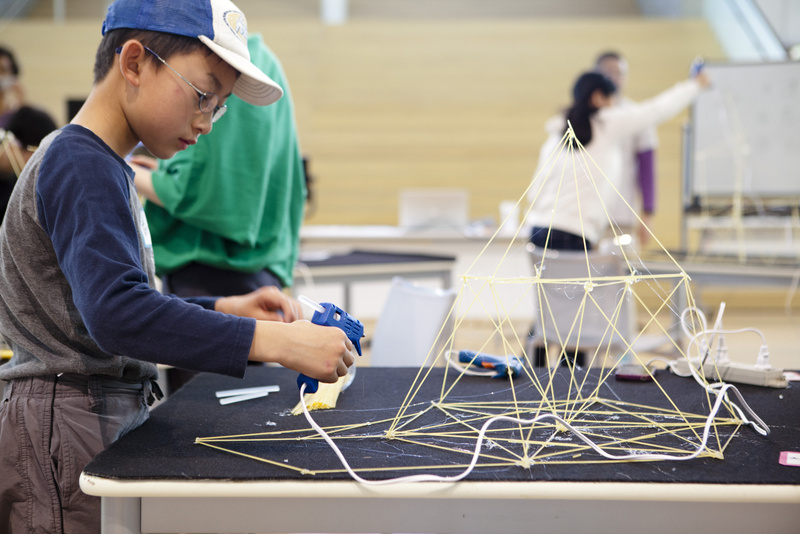 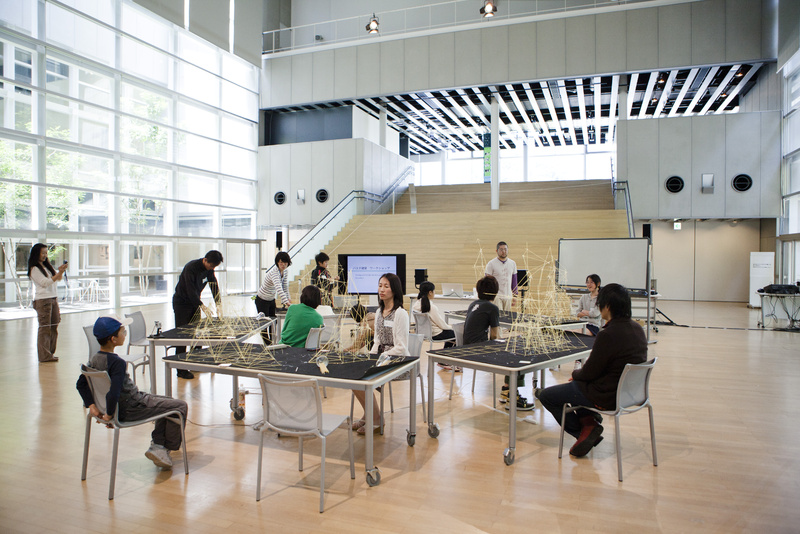 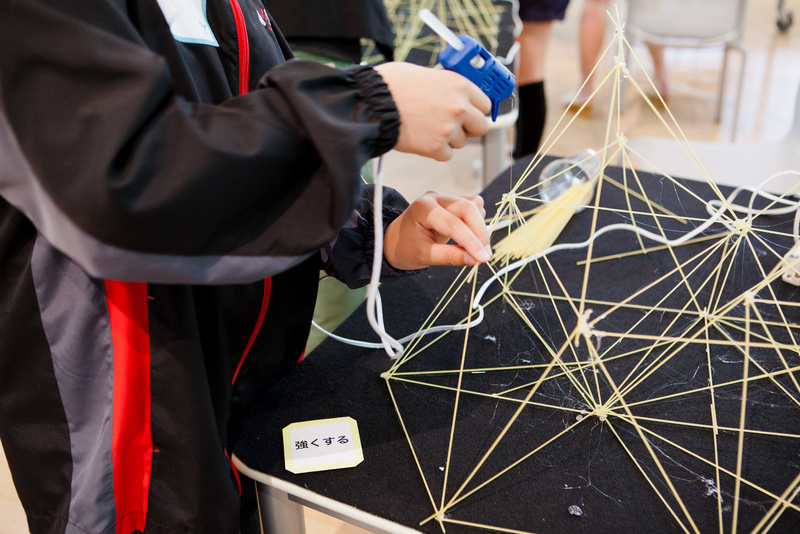 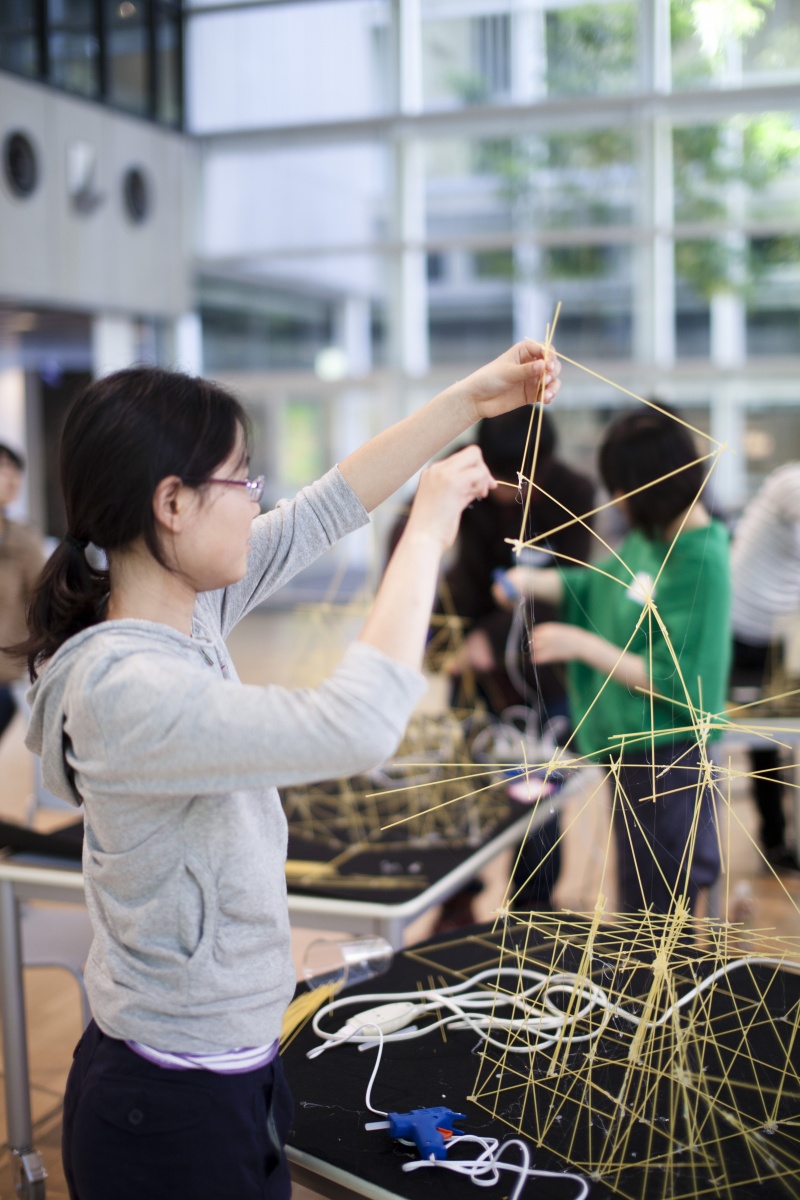 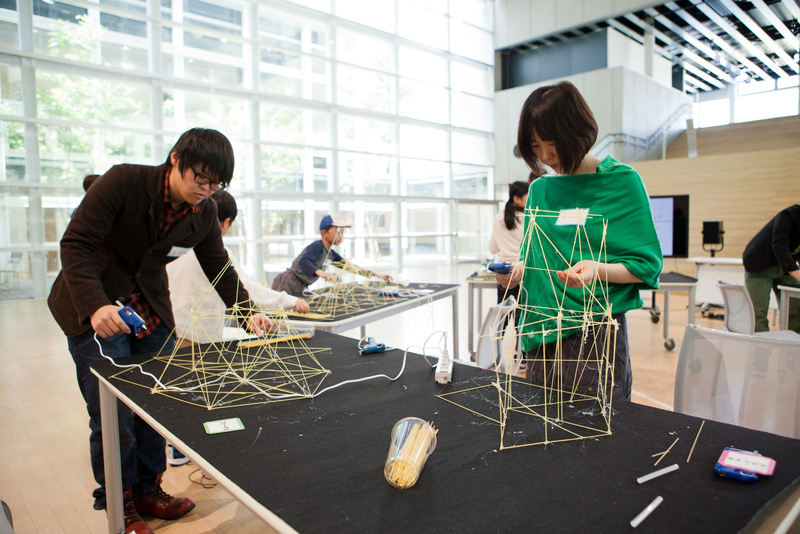 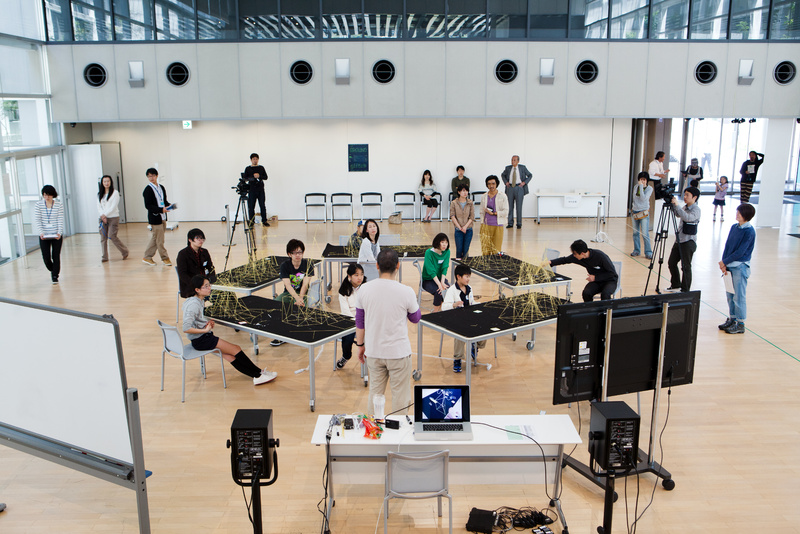 The subject of this workshop was to work out design approaches in a group to build what we called "pasta architecture" - constructions made of pasta based on simple rules.

When building/designing something, we usually look down on our object to grasp a complete objective view while engaging in the actual working process. As this generally gets trickier for larger objects, in architectural design, for example, there are additional steps such as drawing plans and making 3-D models in order to develop the big picture out of abstractions of the object. However, when designing things on a scale as large as towns or road traffic networks, in some cases applying a bottom-up approach and turning the above methods upside down proves more effective.

Based on motifs such as the "cell automaton" calculation model for creating complex forms by simple rules, the participants in this workshop were given individual rules, according to which they took turns to build "pasta architecture". Analyzing the various resulting pasta constructs, the participants learned about bottom-up design methods unbound by individual taste, defined by accumulating multiple subjective judgments.

Tools used in the workshop

The workshop was carried out in groups of six participants each (in some cases only four or five depending on the total number of participants), who were assigned to build pasta architecture from their respective individual seats. Each participant was then given a so-called "order card" with written instructions, following which he/she assembled an architectural body out of pasta. "Order cards" came with six different instructions - "build high", "build solid", "build large", "copy", "build beautiful", "build dense", and the pasta was marked accordingly.

During the construction process, every five minutes the facilitator signaled the participants to take their order cards, move to the next seat, and continue to work on their respective neighbor's architecture according to the instructions on their own cards. After one hour and a total of 12 shifts, the groups had completed the same number of pasta structures as there were participants.

Presentation and evaluation of results

Once the works of pasta architecture were completed, all participants got together to observe the results. As the pasta was marked with six different colors corresponding to the order cards, the participants could see what instructions determined the ways the pieces of pasta were glued together. Even though there were only six types of simple instructions, a great variety of differently shaped pasta architecture was realized at each individual seat, inspiring the participants to discuss together what kinds of background mechanisms are at work in the process.

Examples of structures built in similar ways to the pasta architecture created in the workshop include coral reefs and ant heaps. The latter, for example, are products of a process in which every single one of the myriad ants in the mound acts like a computer program that does simple operations, heaping up earth in accordance with some kind of rule.

Without the involvement of privileged, objective views of architects or construction plans, vast amounts of subjective viewpoints exist on an equal footing, based on which one large structure is built.In complex science, such phenomena are called "emergent behavior", a simple, easy-to-understand example for which would be the model of the "cellular automaton".

Interspersed with such additional knowledge from the realm of complex science, this workshop conveyed a basic understanding of such bottom-up kinds of design approaches that don't rely on individual characters and tastes, and that have been introduced in such fields as urban circulation planning and information architecture in recent years, along with the respective necessary intellectual concepts.