This installation consists of two types of images showing the "Palast der Republik", one of the most well-known architectural constructions representing the former GDR.

Two types of video images are projected next to each other onto the wall. One shows the palace's dismantled and virtually deserted interior, scanning slowly across the part that used to be the parliament. The other consists of video footage of central Berlin shot from the palace's window. The simultaneous projection of these two types of images highlights the way only this building seems to be "frozen in time" while everything else in Germany has been subject to rapid changes since reunification.

Former multi-purpose facility on Berlin's "Unter den Linden" avenue, erected in 1976 on the site of the Berlin Stadtschloss (royal palace) that was damaged in World War II. Its halls were used by the Volkskammer (GDR parliament), and for concerts and TV program recordings. Further accommodated bowling and other amusement facilities, as well as restaurants and bars, the complex was a popular recreation spot for the citizens of Berlin.
However, shortly before the fall of the Berlin wall in 1990, it was decided to close the facility due to the toxic properties of asbestos contained in the palace's interior fittings. Clearance operations continued until 2003, after which the building had remained in a state ready for demolition.
Regardless of a dispute between those who suggested it should be preserved as symbol of the GDR, and others who advocated demolition and reconstruction of the Stadtschloss, after being used as an event space for two years, the palace was finally torn down in 2006. At present (2012), preparations for reconstructing the Stadtschloss are underway. 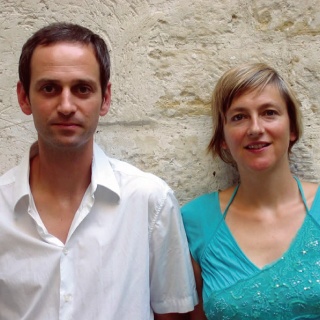 With their work Fischer & el Sani focus on transitory spaces and vacuum situations in urban environments, collective memory and vision in various media such as film, video, installation and photography. They critically reflect the rise and fall of modernity, the intense and uncanny relationship between our contemporary society and utopian projects that have driven the evolution of our history, from the past to the future, or the anachronistic merging of both ends. Their work is a permanent pursuit of and negotiation with the transition of time. Fischer & el Sani are interested in exploring the historic traces of urban landmarks, monuments and events that embody such a transition. Several places that were once hallmarks, centers of political culture, avant-garde art, and social developments, have become more or less temporally blind spots in contemporary society. They bring them back to today's consciousness in their altered, mystified phases: not utopian anymore, not obsolete, but rather not yet redefined.Nina Fischer / Maroan el Sani are filmmakers and visual artists. They have been working together in Berlin since 1993. From 2007 until 2010 they have been Associate Professors for Film and Media Art at Sapporo City University, Japan. International exhibitions they have participated in include Gwangju Biennale 1995, 2002, 2008, Liverpool Biennial of Contemporary Art, 1999, Manifesta 4, Frankfurt 2002, Sydney Biennale 2002, 10th Istanbul Biennial 2007, 5th Media City Seoul Biennale, 2012 and solo exhibitions at Metropolitan Museum of Photography, Tokyo, 1999, Yamaguchi Center for Arts and Media, 2005, Stedelijk Museum Bureau Amsterdam, 2007, Kunsthaus Glarus, 2009, Cobra Museum, Amstelveen, Museum of Contemporary Art Hiroshima, 2010, Austin Museum of Art - Arthouse, Austin and Berlinische Galerie - Museum of Modern Art, Berlin, 2012.