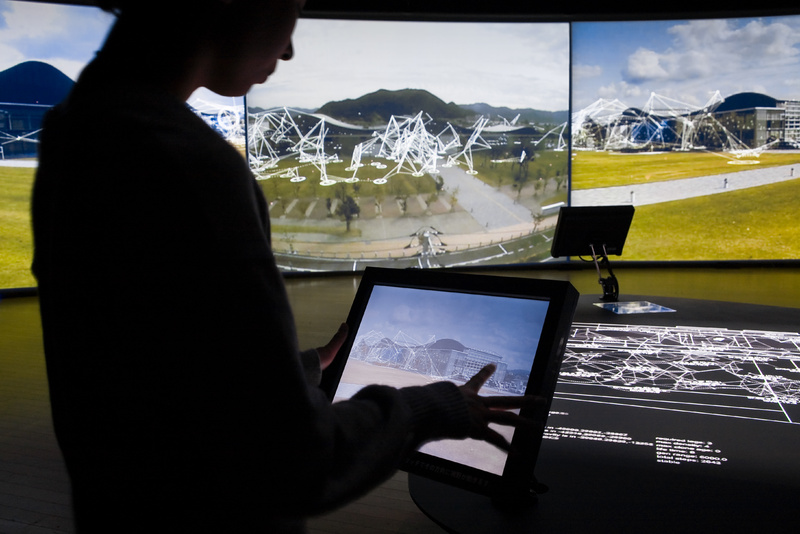 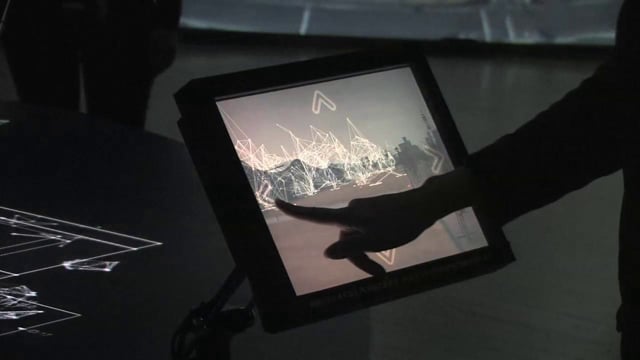 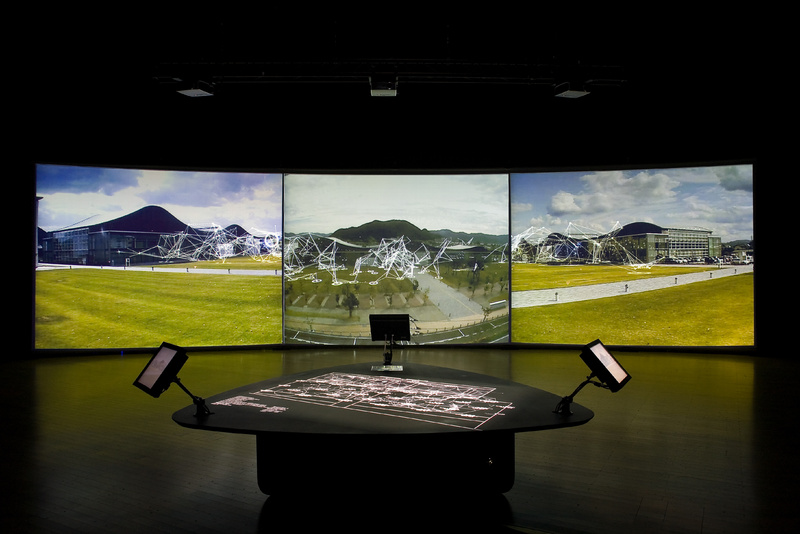 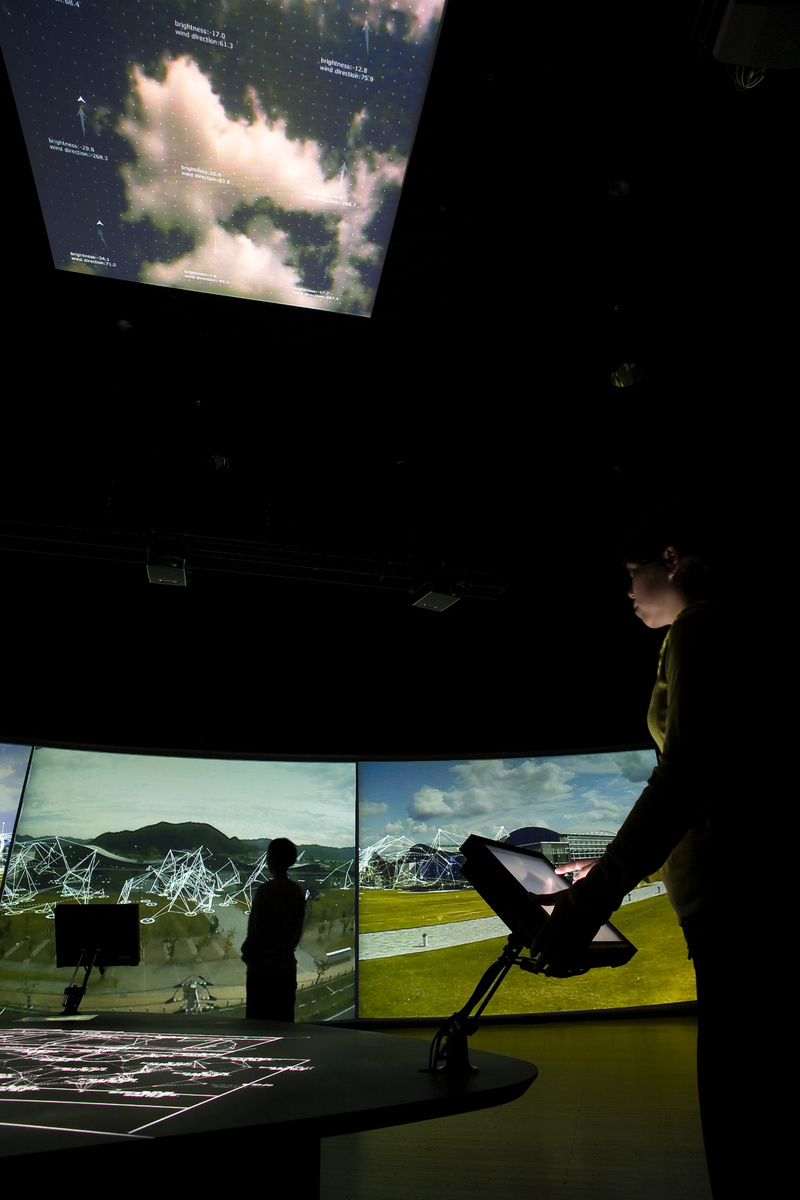 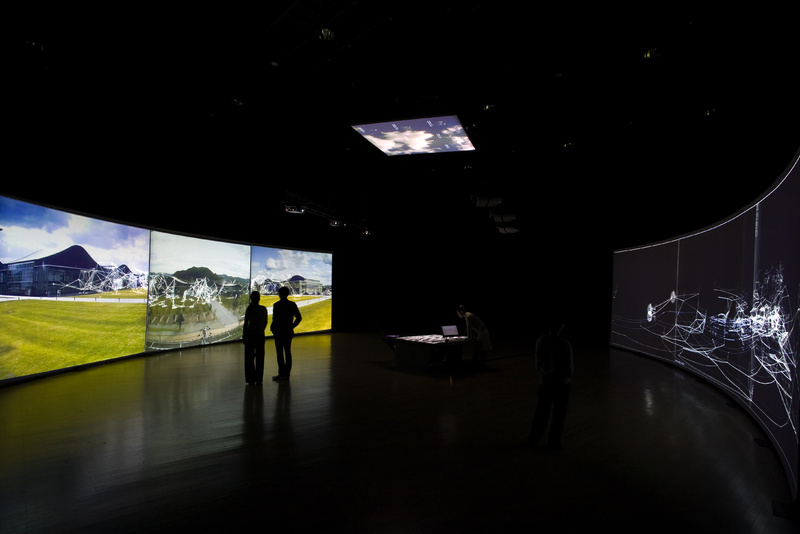 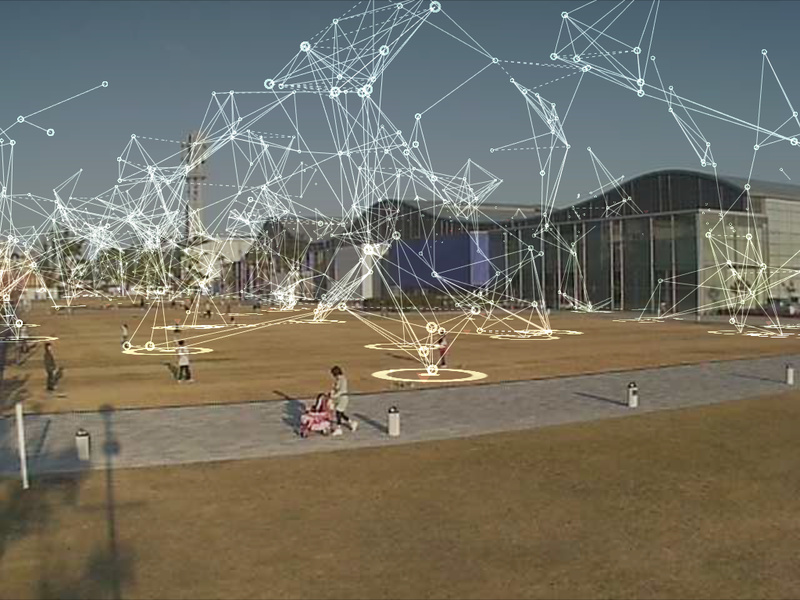 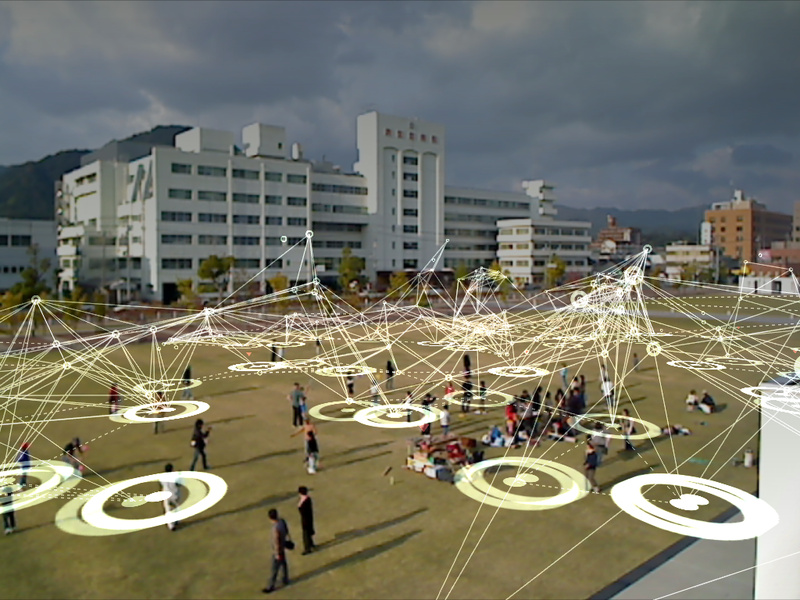 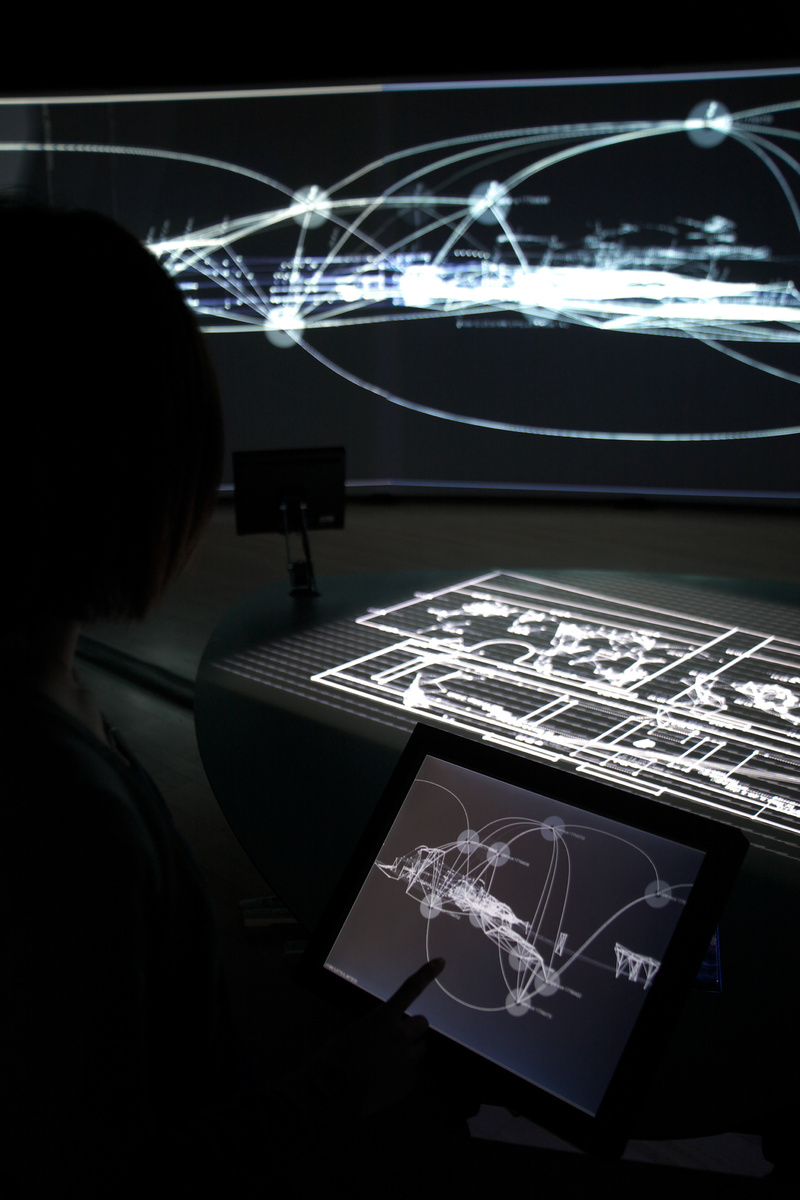 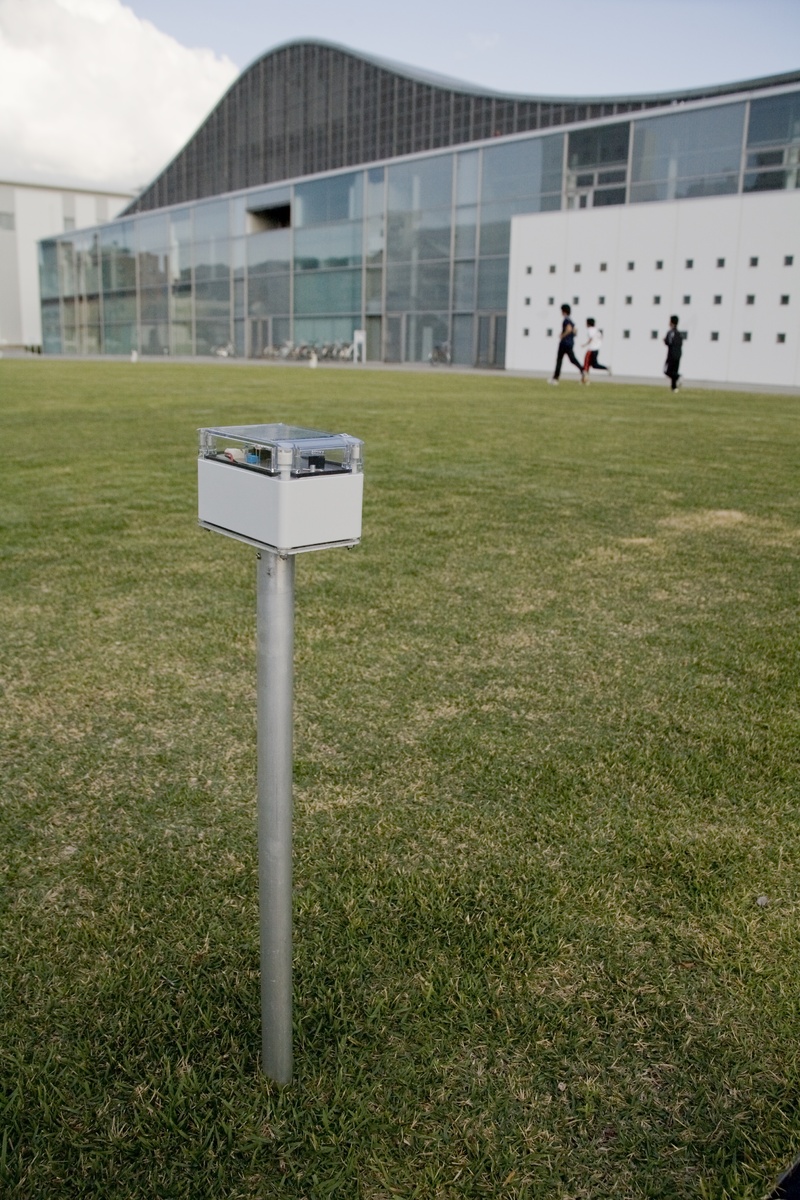 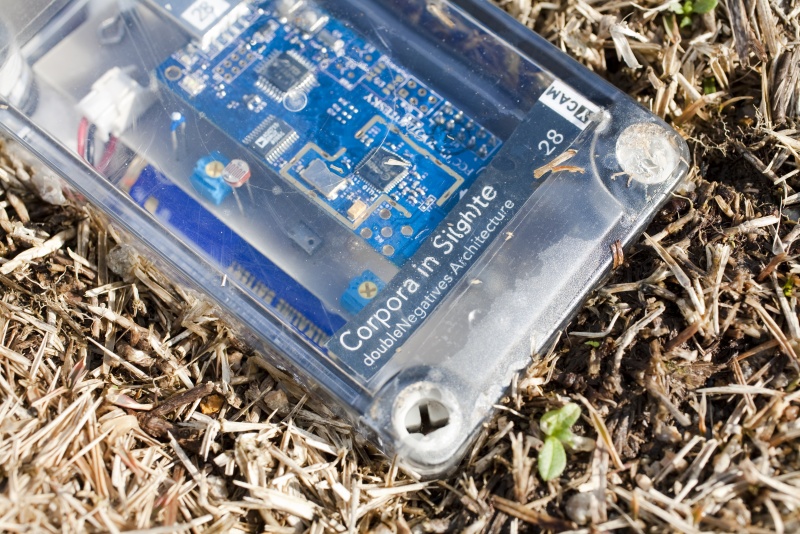 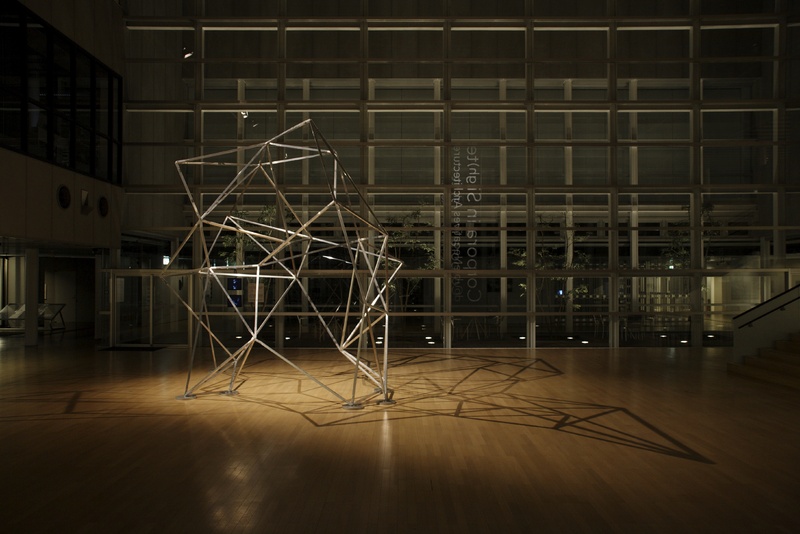 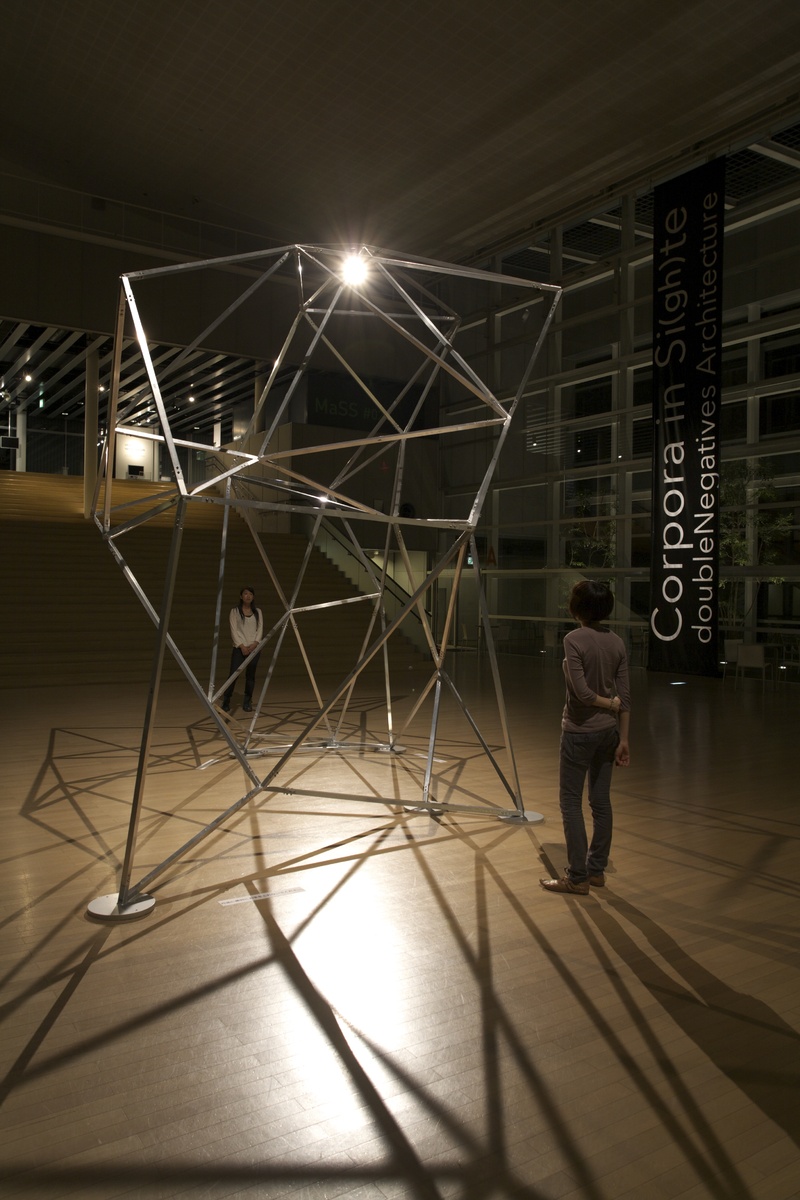 Architecture that autonomously manifests itself in informational spaces as three-dimensional spatial information.

The nodes that configure this architecture become subjective standpoints that each possess a sort of sensory perception, and relocate, disappear or replicate while analyzing environmental information and relationships between the nodes. This process is continually repeated at each nodal point, and eventually culminates in the state of a "self-generating corporate body" as indicated in the keyword "corpora" in the title.
This exhibition featured an installation in which the general idea of architecture generated this way could be experienced interactively, as well as plastic objects embodying parts of the architecture. In addition, it included displays at various points in the Center, on which real-time images of the architecture as seen from the respective location overlapped with images of the actual scenery.

The unique spatial notation method proposed by doubleNegatives Architecture is applied for describing the direction and distance to an object from one's own point of view. In this work, each nodal point continuously determines its own relationship with the surrounding nodes (concentration/sparsity, self-sustaining potential, etc.) based on this notation method.

Approximately 30 small-sized sensor units detecting temperature, humidity, illuminance, voice level, etc. are distributed across the Chuo Park in front of YCAM, while an aerovane is installed on the Center's rooftop. Through wireless ad hoc communication between these devices, a mesh network is established that transmits environmental information from the surroundings of YCAM to a computer.
Each nodal point continues to change its state based on data collected by the sensors.

Projected onto a large screen set up at the venue are plans of this architecture depicted according to the "Super Eye", superimposed by way of AR technology with images of the architecture's actual exterior view. Through these images, the viewer can experience a state that crosses back and forth between local and holistic standpoints. Furthermore, inside the venue, sounds responding to the nodes' transformations created the impression of actually being inside the architecture.

In the Foyer, objects made of aluminium and iron representing data of parts of the architecture cut out at certain points in time were exhibited. These works allowed viewers to experience on a human scale what kinds of instinctive feelings and impacts the space defined by the architecture exerts.

doubleNegatives Architecture launched in 1998 as the brainchild of architect Sota ICHIKAWA, views the processes and devices used to measure space as "architecture", assembling a team for each project and engaging in a unique spectrum of activities including installations, software and architectural design. Currently dNA is employing a bottom-up-style cell automaton program to study architectural modeling through the autonomous generation of forms, and in future aims to convert this to three-dimensional media and present it in urban spaces.