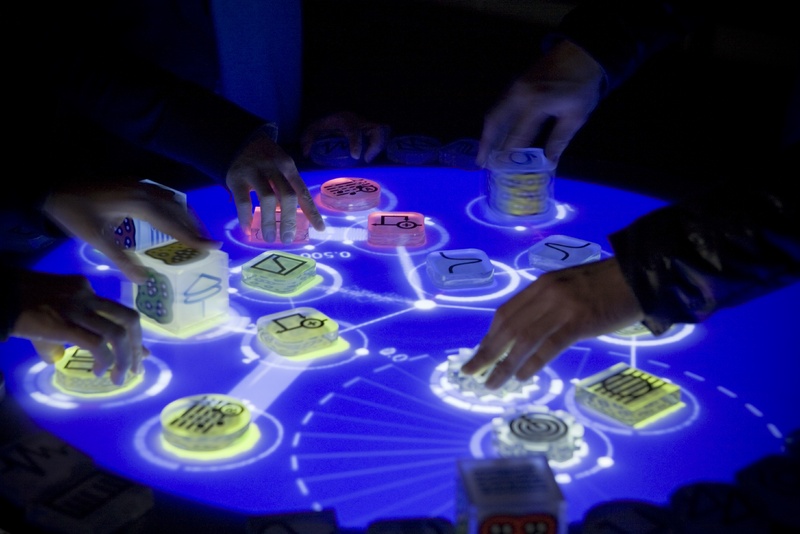 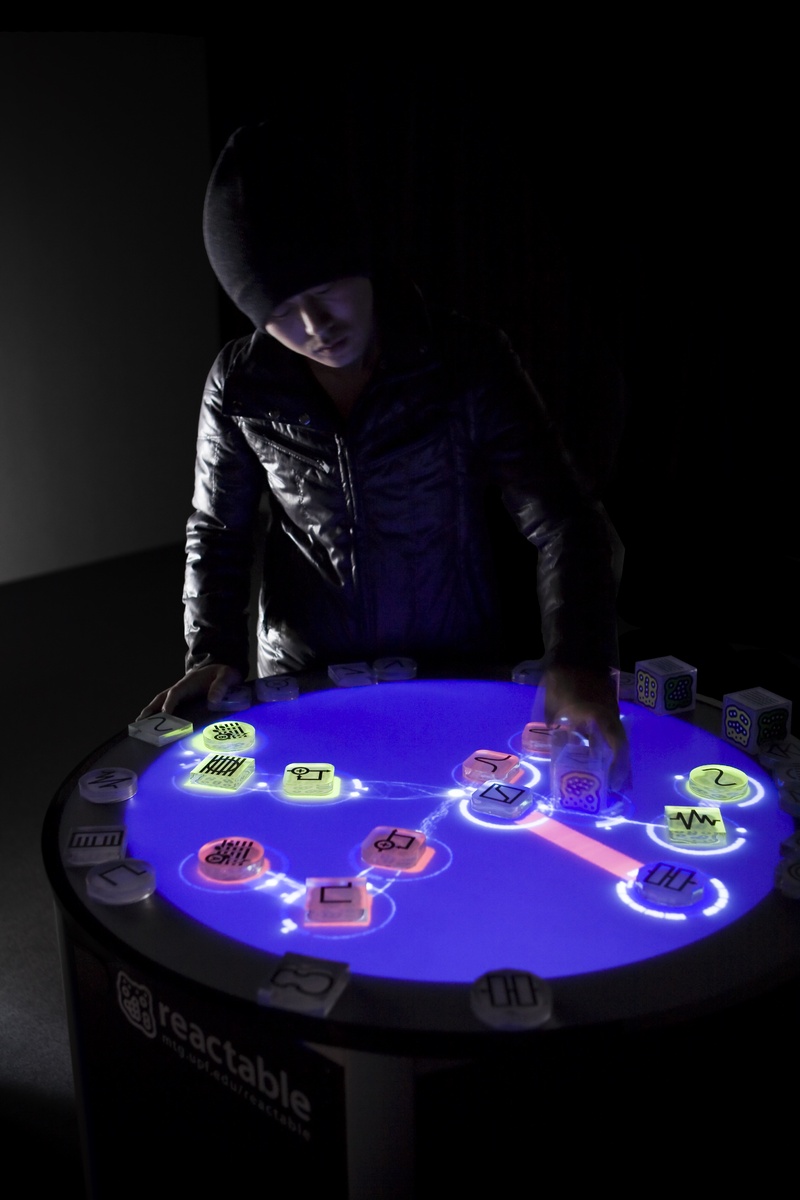 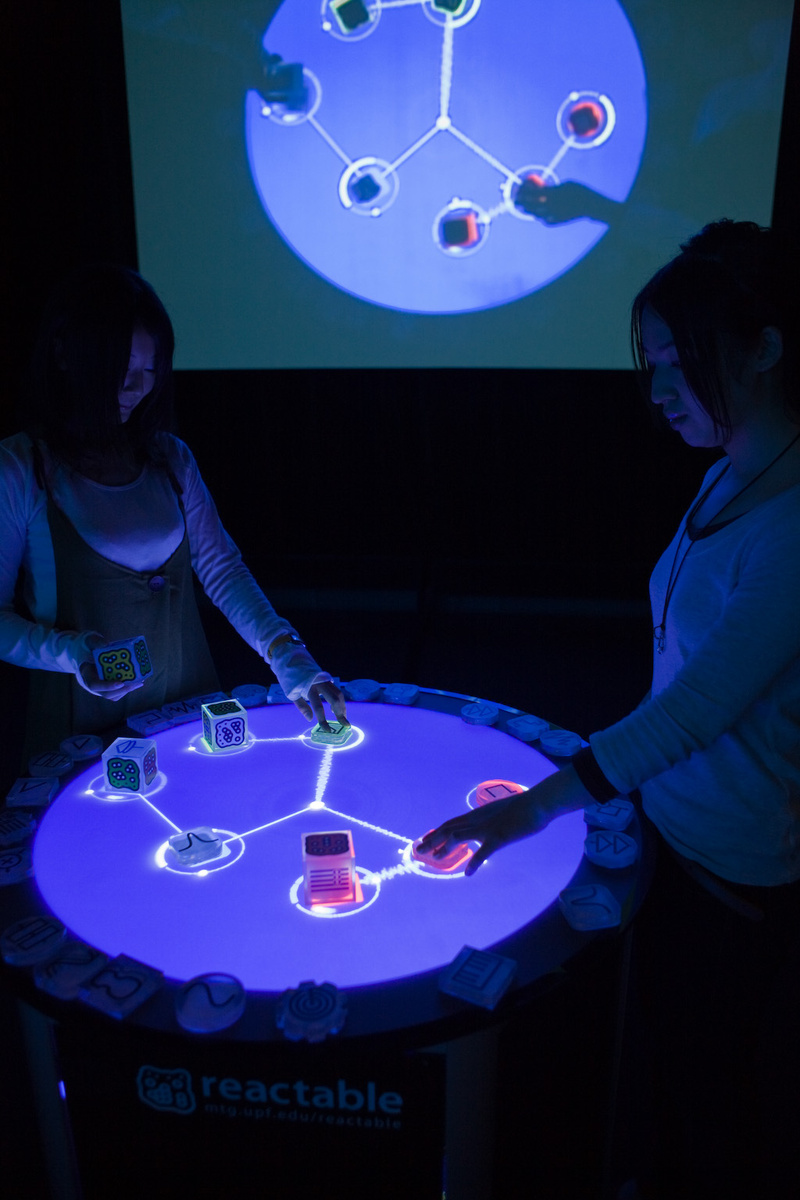 This is the installation version of the electronic musical instrument "Reactable" that gathered significant attention when used on stage during Icelandic singer Björk's "Volta" concert tour.

Multiple objects placed on a round-shaped illuminated table are assigned various functions, such as looping, oscillating or filtering sounds. By moving or rotating single objects, the user can design the relationships between them, and thereby manipulate sounds or visuals, whereas the images projected onto the table define the objects' functions and parameters as needed. The device's modification for this installation version made it possible for multiple users to play it at the same time while learning playing styles intuitively and collaboratively.

Dr. Sergi Jordà holds a degree in Fundamental Physics and a PhD in Computer Science and Digital Communication. After discovering computer programming during his undergraduate years in the early 1980s, he decided to fully devote himself to live computer music and interactive media. Throughout the 1990s he conceived and developed award winning interactive installations and multimedia performances, in collaboration with internationally renowned Catalan artists such as Marcel•lí Antunez or La Fura dels Baus. Since the late 1990s, he is a researcher in the Music Technology Group of Universitat Pompeu Fabra in Barcelona, and an Associate Professor in the same university. His main research interests are in the confluence of HCI and tangible and musical interaction, augmented communication using tabletops and brain computer interfaces. He has authored 20 articles in journals and book chapters, more than 50 peer-reviewed conference papers as well as given more than 20 invited presentations and keynote talks. He has received several international awards, including the prestigious Prix Ars Electronica Golden Nica. He is currently best known as one of the inventors of the Reactable, a tabletop musical instrument that accomplished mass popularity after being integrated in Icelandic artist Bjork's last world tour, and he is one of the founding partners of the spin-off company Reactable Systems.

Martin Kaltenbrunner is Professor at the Interface Culture Lab, University of Art and Industrial Design in Linz. His research concentrates on tangible user interfaces and the development of novel human computer interaction concepts within open tools for creative production. As co-founder of Reactable Systems he had been mainly working on the interaction design of the Reactable - an electronic musical instrument with a tangible user interface. He is author of the open source tangible interaction framework reacTIVision and the related TUIO protocol, which have been widely adopted for the realization of tangible tabletop applications.

Gunter Geiger is a software programmer and designer of interactive music applications. He currently works as CEO of Reactable Systems a company which specializes in new musical interaction concepts through its Reactable musical instrument and the Reactable line of mobile applications. He is one of the founders of the Pure Data community and has been engaged in free tools for musical production on the Linux operating system. He studied at the Institute for Electronic Music in Graz, Austria and the Music Technology Group in Barcelona, Spain and is currently living and working in Barcelona.

Marcos Alonso is a programmer, designer and musician whose work is born out of his passion for music and computers and how to use new technologies for music performance. During his research work at the Music Technology Group of the Universitat Pompeu Fabra he co-created the Reactable, where he was mainly responsible for the graphics and interface design of the instrument. Since its presentation in 2005 the Reactable has been internationally acclaimed and received many worldwide awards. In 2009 he co-founded Reactable Systems where he currently works. He was born in 1980 in Barcelona.