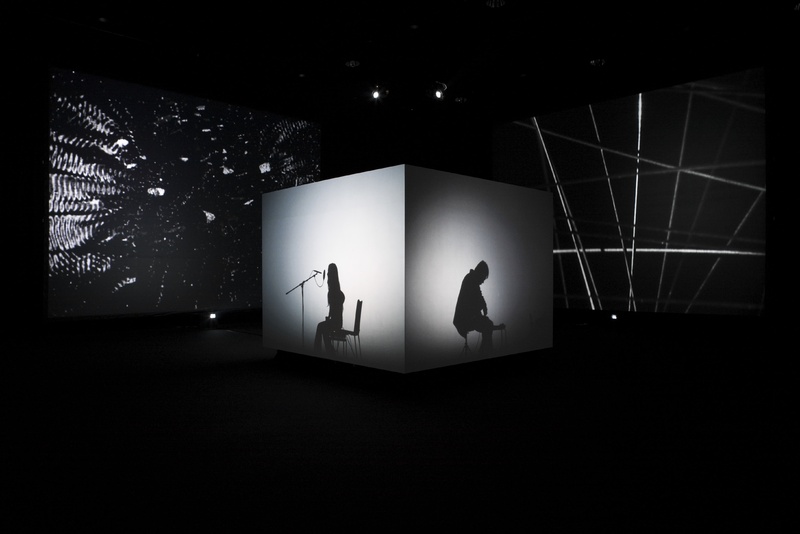 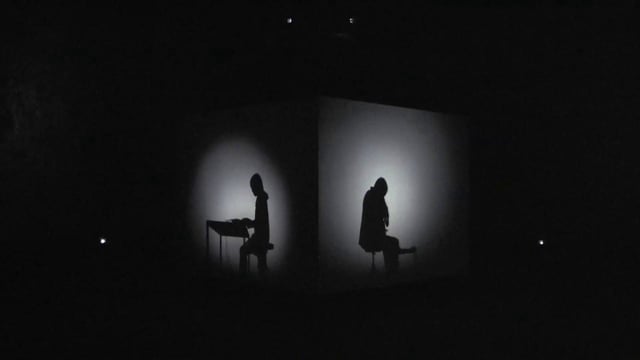 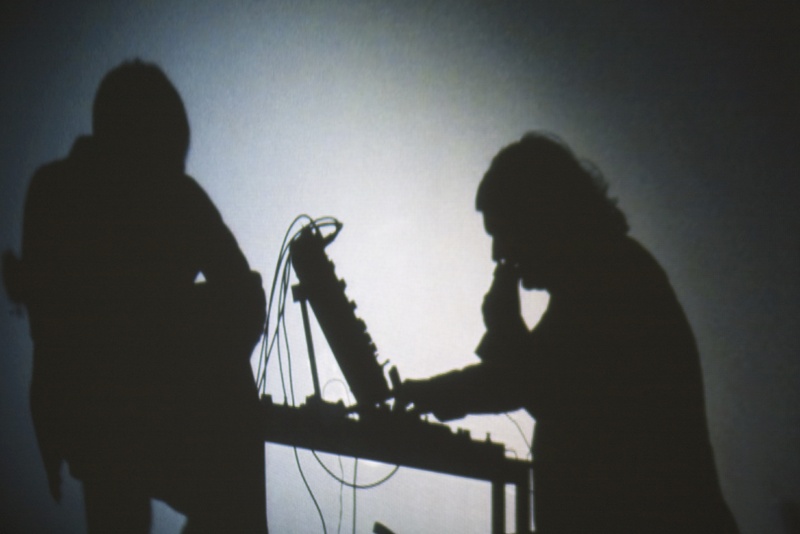 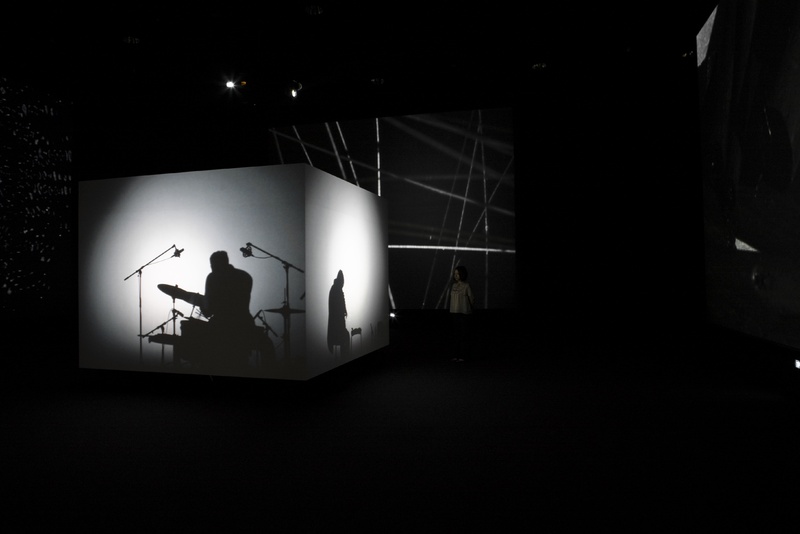 Perpetually spinning ensembles from a database

A large cubic object is placed in the center of the event space, onto each side of which silhouettes of musicians are projected. At the same time, the music these musicians are playing is audible from the inside of the cube. Both silhouettes and music were previously recorded during separate improvised solo performances by eight musicians, and with the help of a computer program that controls their arrangement on a time axis, these sequences are continuously spun into mutually intervening and interacting ensembles. In addition, details of objects made from wood, metal and liquids are projected onto large screens on the walls opposite from each of the cube's sides, flowing/vibrating in concert with the musicians' projected images.

While the visitor can hear all performed music, but not watch the cube's four sides and the surrounding walls simultaneously, it is impossible to grasp all aspects of the work at once. 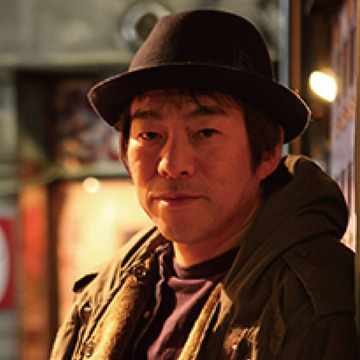 Born 1959 in Yokohama. Has been attracting a lot of attention around the globe with his endeavors across genres and styles, from experimental music to jazz and pop, while also being renowned for his musical contributions in the realms of cinema, TV and theater. In recent years, his focus has been on musical works and sound installations, as well as collaborations with various artists and regular citizens under the name “Ensembles,” presented in a rather unique concert style. At the same time, he continues to engage in a range of participatory projects. After the Great East Japan Earthquake in 2011, he launched a project in the Fukushima area, where he spent his teens, and in 2012, received a Ministry of Education's Award for Fine Arts for his work on the “Project FUKUSHIMA!” His numerous other awards include a Japan Record Award for the score for the TV program “Amachan” in 2013. Since 2014, Otomo has been devoting himself to Ensembles Asia, launched as a vehicle for establishing a network across Asia through music. He was the artistic director of the Sapporo International Art Festival 2017, and in 2019, director of the reorganized Waraji Matsuri, a popular local festival in Fukushima. 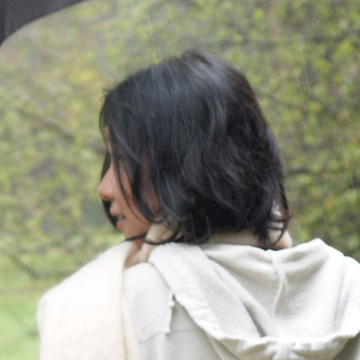 Yuki Kimura was born in 1971 in Kyoto. She completed her graduate studies at Kyoto City University of Arts in 1996. Her installation works have continued to explore the theme of time and dimension in concurrence to the present space where the installations have placed. She continues to exhibit her art work worldwide, major group shows including: California-Pacific Triennial, the Orange County Museum of Art, Newport Beach (2017); “Ocean of images: New Photography 2015,” The Museum of Modern Art, New York (2015) and 30th São Paulo Biennial (2012). 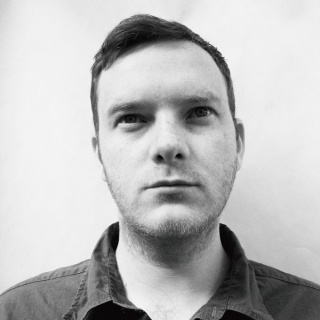 Benedict Drew (b. 1977) works across video, installation, sound and other media. His work uses the apparatus of film, video and music to create ecstatic encounters with technology and its oscillation between the exalted and the commonplace, between desire and redundancy. Using the idea of illusion and illusionism within sound and moving image, his work embraces both hi and low tech devices and tools in creating fantastical worlds that are conditioned by, but aim to resist, the hierarchies of authority and control. Recent solo exhibitions include Now Thing, Whitstable Biennale. This Is Feedback, Outpost, Norwich. Gliss, Cell Project Space. The Persuaders, Circa Site / AV Festival, Stephenson Works, Newcastle. Group exhibitions include Revolver part 3, Matts Gallery London. Young London, V22. Paraproduction, Boetzelaer|Nispen Amsterdam. Containing the Possible, Pippy Houldsworth Gallery.There Is Not And Never Has Been Anything To Understand!, ACS Gallery. Things That Have Interested Me, Waterside Contemporary, and Soundworks, ICA. Benedict Drew graduated from Slade School of Fine Art in 2011 He has frequently collaborated with a diverse mix of artists and musicians including Nathan Budzinski & Auto Italia, Otomo Yoshihide, Rhodri Davies, Greg Pope, Emily Richardson, 'The Work In Progress', Sachiko M and Emma Hart. Performing often in the UK and internationally including the Tate Modern , London, the Yamaguchi Centre for Art and Media, Japan. Rotterdam Film Festival, Kill Your Timid Notion, Dundee Contemporary Arts Centre, ICA London, 'Performa 09' New York and The Museum of Contemporary Canadian Art. Benedict Drew has made many radio works for Resonance FM , including the series 'Unter Radio' and most recently Concrete Decent Transmission for Writtle Calling. He was lead-artist for Chisenhale Gallery's Propeller Project (2012) and a LUX Associate Artist (11/12 ). In 2012 he was shortlisted for the prestigious Jarman award. He is represented by Matts Gallery. 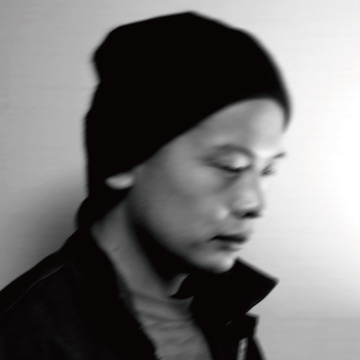 Born in 1982, his interest lies in the most primitive of technologies, calculation. His work is focused on installations that use either mathematical processing itself as conducted through computer programming or the results of that processing. In 2016, he began creating the series datum at a residency at The Kavli Institute for the Physics and Mathematics of the Universe (Kavli IPMU), and datum was shown at the Toyota Municipal Museum of Art and at a pre-event of the Sapporo International Art Festival. In 2017, he created one of the works in that series through a residency at the ALMA telescope, located at Chile’s highest point of approximately 5000 meters and it's awarded as Excellence Award in Art Division of the 22nd Japan Media Arts Festival. He has also participated in creating the work of Japanese artists, such as Ryoji Ikeda and Seiko Mikami, and is the artistic director for ARTSAT: Art and Satellite Project. 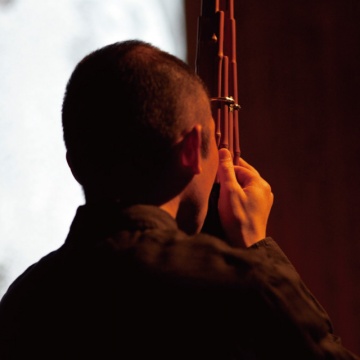 Sho player Ko Ishikawa studied Japanese traditional Gagaku music under his masters Mayumi Miyata, Hideaki Bunno and Sukeyasu Shiba. He is a member of Reigakusha Gagaku Ensemble. He has been performing not only Gagaku music but also contemporary and experimental music. He is widely acclaimed on the national and international scenes. 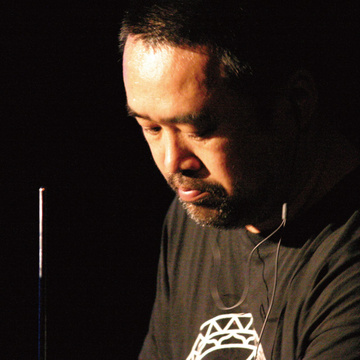 After quitting his longstanding job as a professional drummer in 2012, Ichiraku returned into the spotlight when he unveiled “DORAnome” and “LaserGuitar,” two musical instruments developed together with tkrworks, Roland and Vestax. He spent the last few years developing, building and presenting the self-built “Laser Modular” synthesizer around the world in live performances and workshops, while at one organizing worldwide GIGANOISE, GIGAMODULAR and GIGADISCO festivals. He received an Honorary Mention in the Digital Musics department at Ars Electronica, and was invited to participate in the Venice Biennale and the Expo Zaragoza 2008. In 2019, he attracted public attention with three works that he curated at Art Setouchi. Ichiraku currently lives in Yamaguchi. 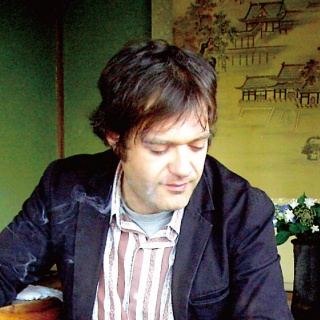 Born in 1969. He is an American musician and producer. Known for his idiosyncratic tastes, and regarded as something of an expert on modern experimental music, he has released albums of jazz, electronica, noise and guitar rock music. O'Rourke has collaborated with the likes of Derek Bailey, Stereolab, Loren Mazzacane Connors, Fennesz, Henry Kaiser, Flying Saucer Attack, and most recently produced Beth Orton's new album Comfort of Strangers. He has produced albums by artists as varied as John Fahey, Smog, Faust and Tony Conrad. He mixed Wilco's very successful Yankee Hotel Foxtrot album, which made many reviewers' top ten lists for 2002, and produced their 2004 album, A Ghost is Born, for which he won a Grammy for "Best Alternative Album". During the recording of Yankee Hotel Foxtrot, O'Rourke collaborated with Wilco member Jeff Tweedy and pre-Wilco Glenn Kotche, a veteran of the Chicago scene and O'Rourke's own solo albums. O'Rourke has released a large number of albums and was once a member of Gastr Del Sol with songwriter David Grubbs and The Red Crayola. From 2000 he played bass guitar and guitar with New York City band Sonic Youth; he quit as a full member in 2005 to pursue his interest in filmmaking, but continues to play with them in their side projects. 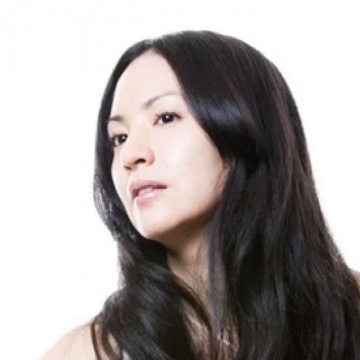 Musician, writer, photographer. Featured on the album “50ans de Saravah” celebrating the 50th anniversary of the establishment of the French label Saravah. Authored the essay Kotori ga utau, watashi mo utau. Shizuka na sora ni hibiku kara (Shufu to Seikatsu-sha). Translations include the French picture book Oyasuminasai (Anonima Studio), and American literature such as Dear Santa (Japanese edition published by Chronicle Books Japan). In 2018, she published her own child-rearing journal Nikitama (Shodensha), and serially contributed photographs and essays to the magazine veggy. Karie currently lives in New York. Having lived abroad for many years, she is particularly conscious about her balanced diet and physical health. 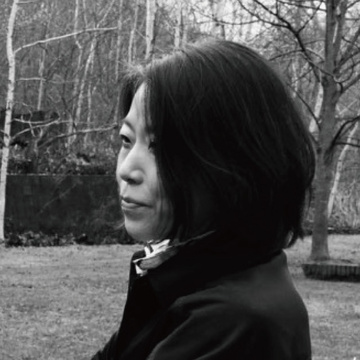 The minimalist sound of “Sine Wave Solo,” released in 2000, instantly put her in the center of the music world’s attention. She went on to win a Golden Nica at Ars Electronica in 2003, and present live performances and sound installations at festivals around the world. The piece “Shiosai no memory” (co-written with Yoshihide Otomo), produced for the TV program “Amachan,” initially inspired her to pursue a career as a composer. Sachiko M curates and directs the Open Gate exhibitions investigating the area between “music” and “art,” and continues to explore various new possibilities. 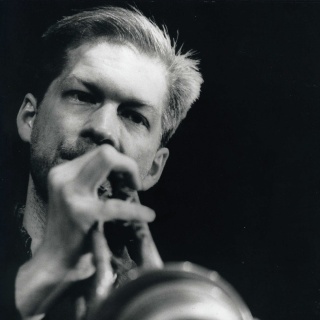 Born 1964 in Cologne, Germany. Studied piano and trumpet (with Malte Burba) at the Musikhochschule, Cologne, Germany. Moved to Berlin in 1994. He has worked together with numerous internationally respected figures in the fields of "Improvised Music", "Composed Contemporary Music", "Jazz" and "Electronic Music". He has developed a unique style of trumpet playing based in part on unusual, often self-invented techniques. Concert tours in Europe, North and South America, Asia, Africa and Australia. Appearance on numerous CD and record releases. 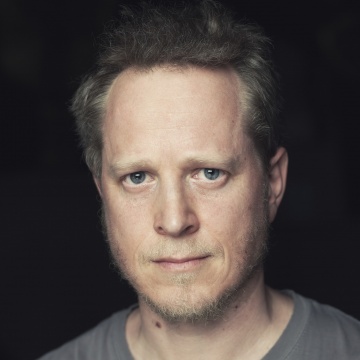 Martin Brandlmayr, (*1971 in Bad Ischl/Austria) works in the fields between improvisation and composition and on the intersection of electronic and acoustic soundworlds. As a drummer he is widely recognized for his distinctive style combining experimental methods and extended techniques with groove elements. Since the mid 90ies he is exploring hidden sounds and tonal aspects on his instrument. He is a member of the groups Polwechsel, Trapist, Kapital Band 1 and became internationally known primarily through the Trio Radian, founded in 1997. He has released 7 albums with Radian since the end of the1990s, 5 of them on the US label Thrill Jockey. In 2018 he received the renowned Karl Sczuka Prize for his radio play "Vive les fantômes”

OTOMO Yoshihide: Between Music and Art