this video was shot with a high-speed camera as normally used in sports engineering, car safety experiments and space exploration among others. The final result emerged out of a trial-and-error process that further involved the use of a computer-controlled vibration device to cause subtle movements of that camera while recording. The myriad video sequences shot this way were composed into one videodance piece by way of intricate synthesis, minute speed regulation and other elaborate processing. A successful attempt at depicting a body's presence and movements too subtle to recognize with the naked eye, the work presents at once a new image born out of the relationship between media technology and the human body. 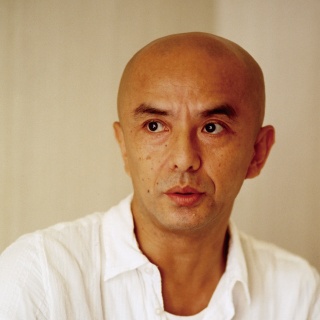 Saburo Teshigawara began his unique creative career in 1981 in his native Tokyo after studying plastic arts and classic ballet. In 1985, he formed KARAS with Kei Miyata and started group choreography and their own activities. Since then, he and KARAS have been invited every year to perform in major international cities around the world. In addition to solo performances and his work with KARAS, Teshigawara has also been receiving international attention as a choreographer/director.He has been commissioned by many international Ballet companies such as the Paris Opera to create repertoire pieces for the company. Teshigawara has likewise received increasing international attention in the visual arts field, with art exhibitions, films / videos as well as designing scenography, lighting and costume for all his performances. Teshigawara's keenly honed sculptural sensibilities and powerful sense of composition, command of space and his decisive dance movements all fuse to create a unique world that is his alone. Keen interests in music and space have led him to create site-specific works, and collaboration with various types of musicians. Besides the continuous workshops at the KARAS studio in Tokyo, Saburo Teshigawara has been involved in many education projects. Recent young members of the company KARAS are from the project "Dance of Air", an educational project bringing out a performance as a culmination of a year-long workshop process, produced by the New national Theatre Tokyo. S.T.E.P. (Saburo Teshigawara Education Project) has been initiated since 1995 with partners in the UK, also in the same style as "Dance of Air". In 2004, he was selected as the mentor of dance for The Rolex Mentor and Protege Arts Initiative, to work for one year with a chosen protégé. Since 2006, he has begun a professorship at the Department of Expression Studies, the College of Contemporary Psychology, St. Paul's (Rikkyo) University in Japan, where he teaches movement theory and conduct workshops. Through these various projects, Saburo Teshigawara continues to encourage and inspire young dancers, together with his creative work.