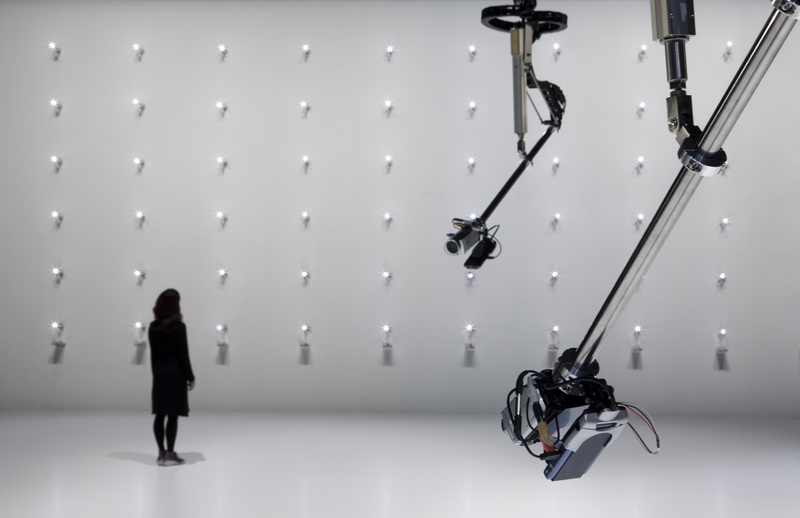 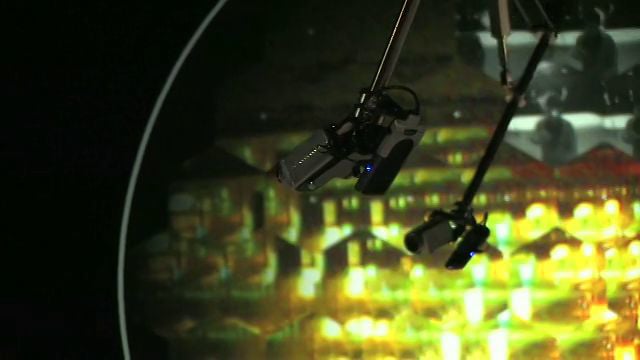 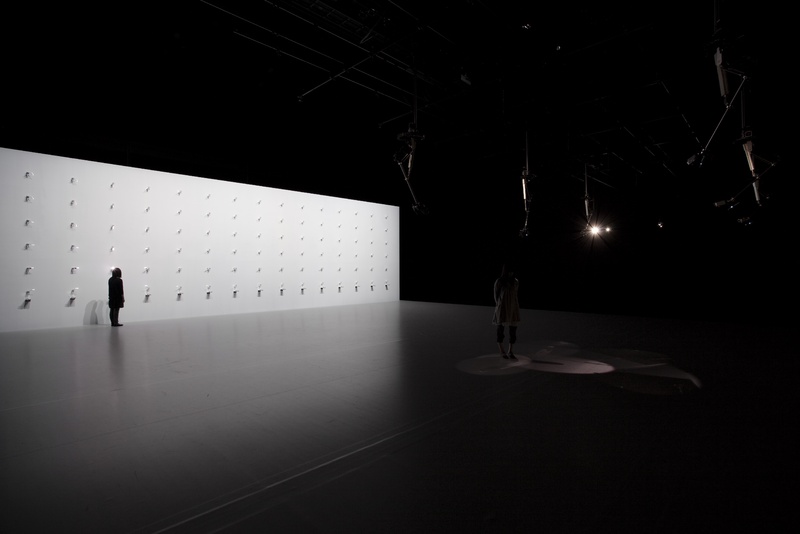 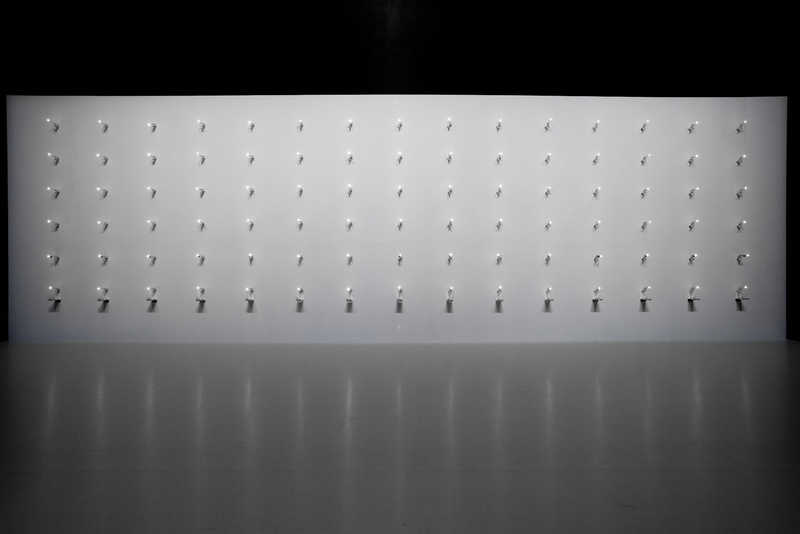 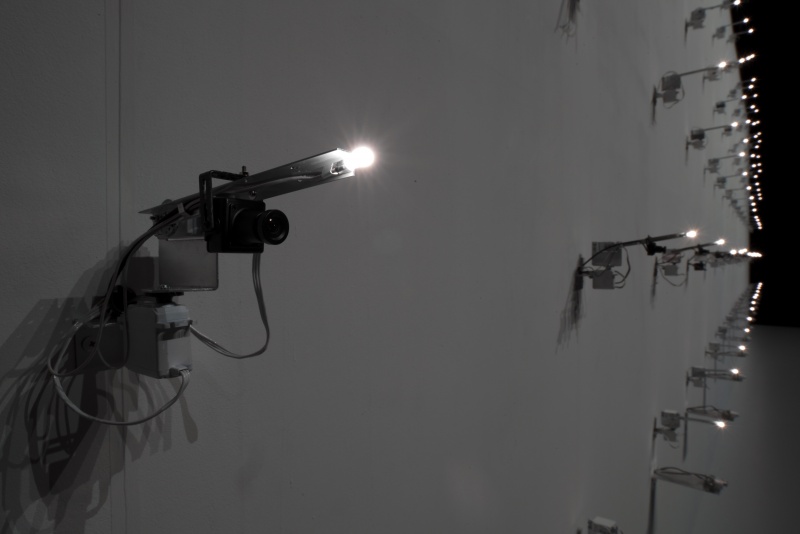 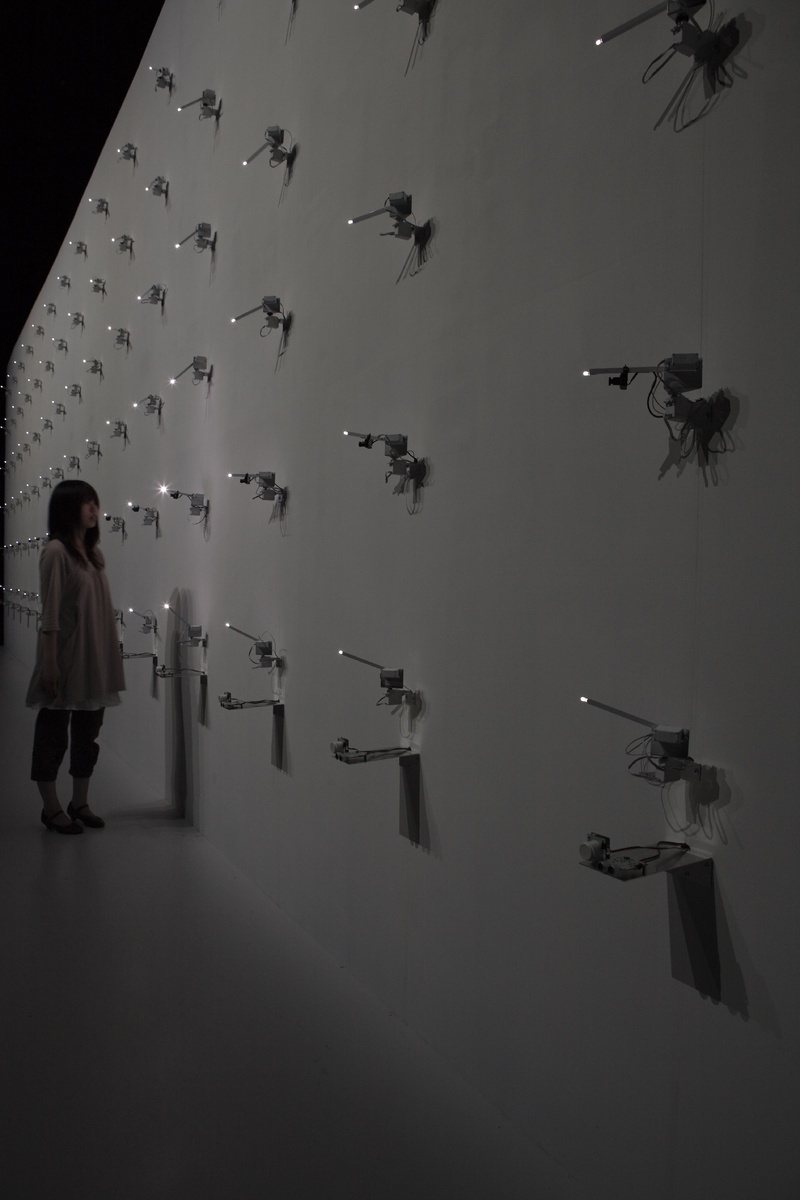 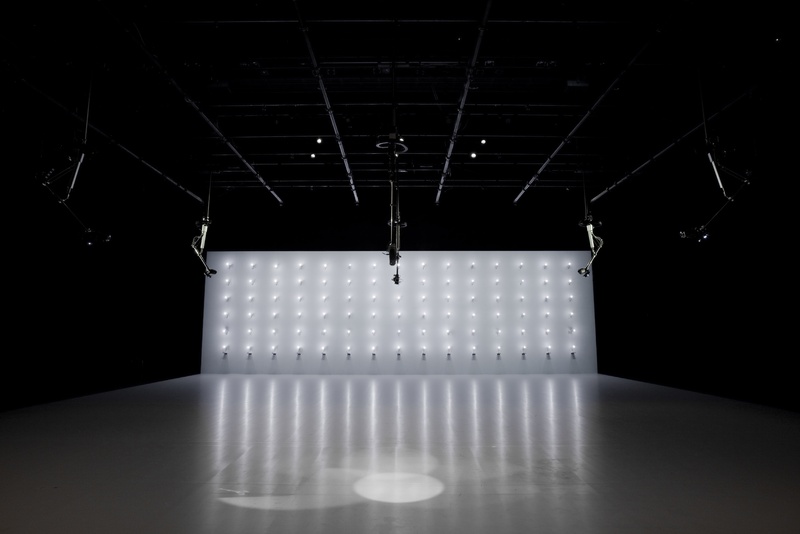 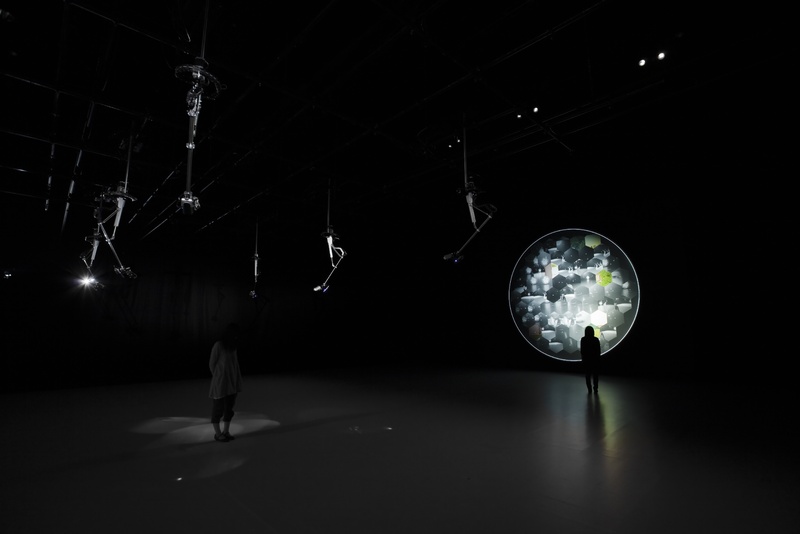 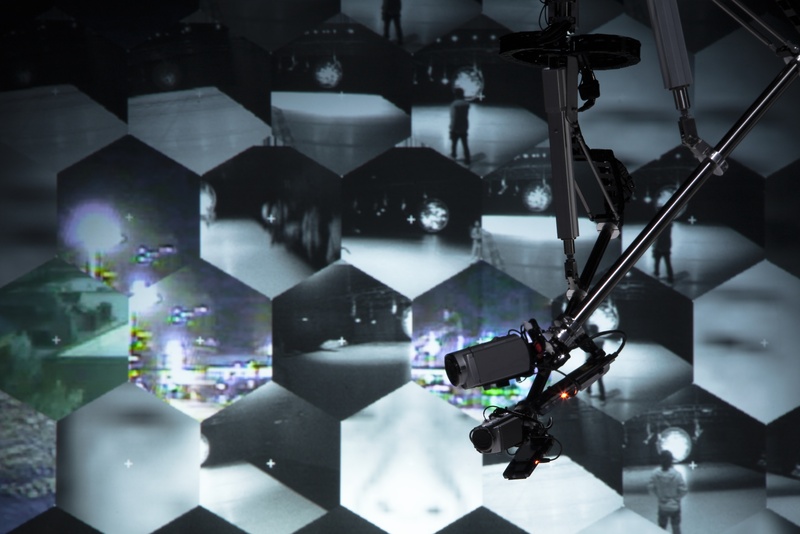 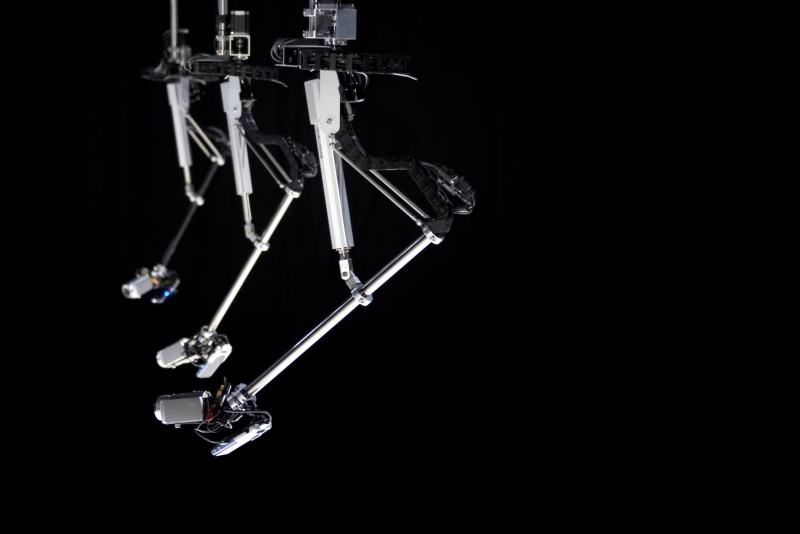 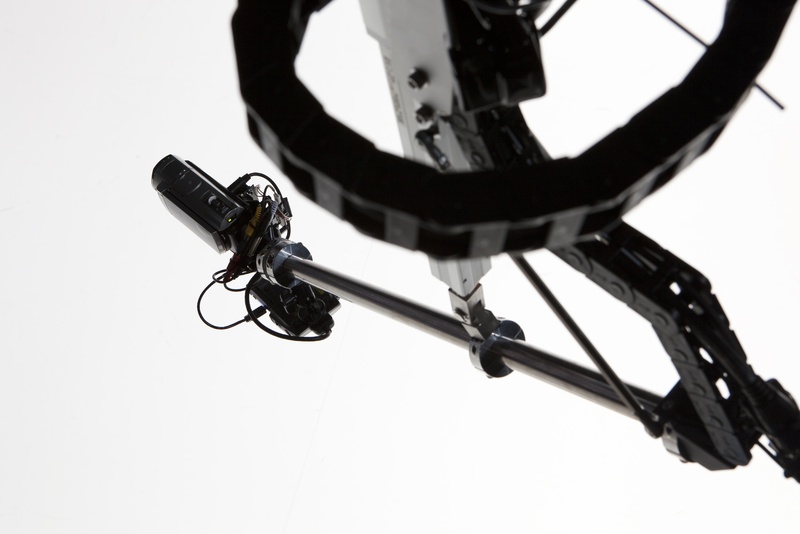 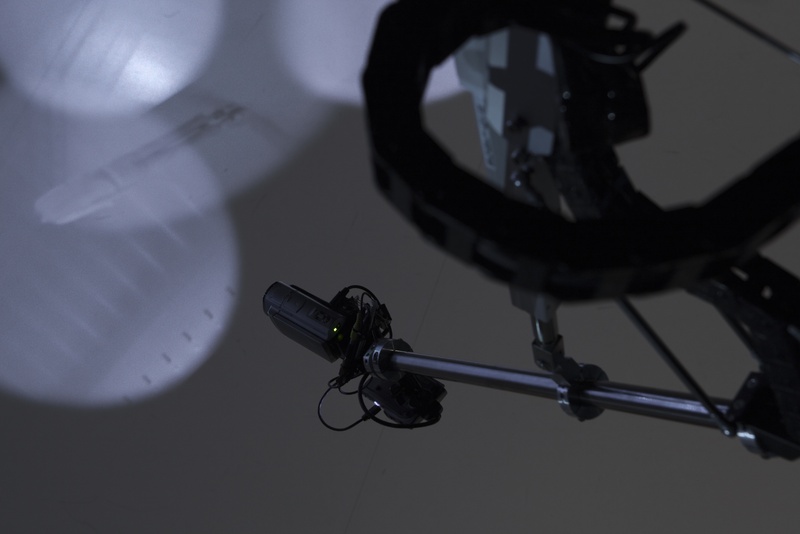 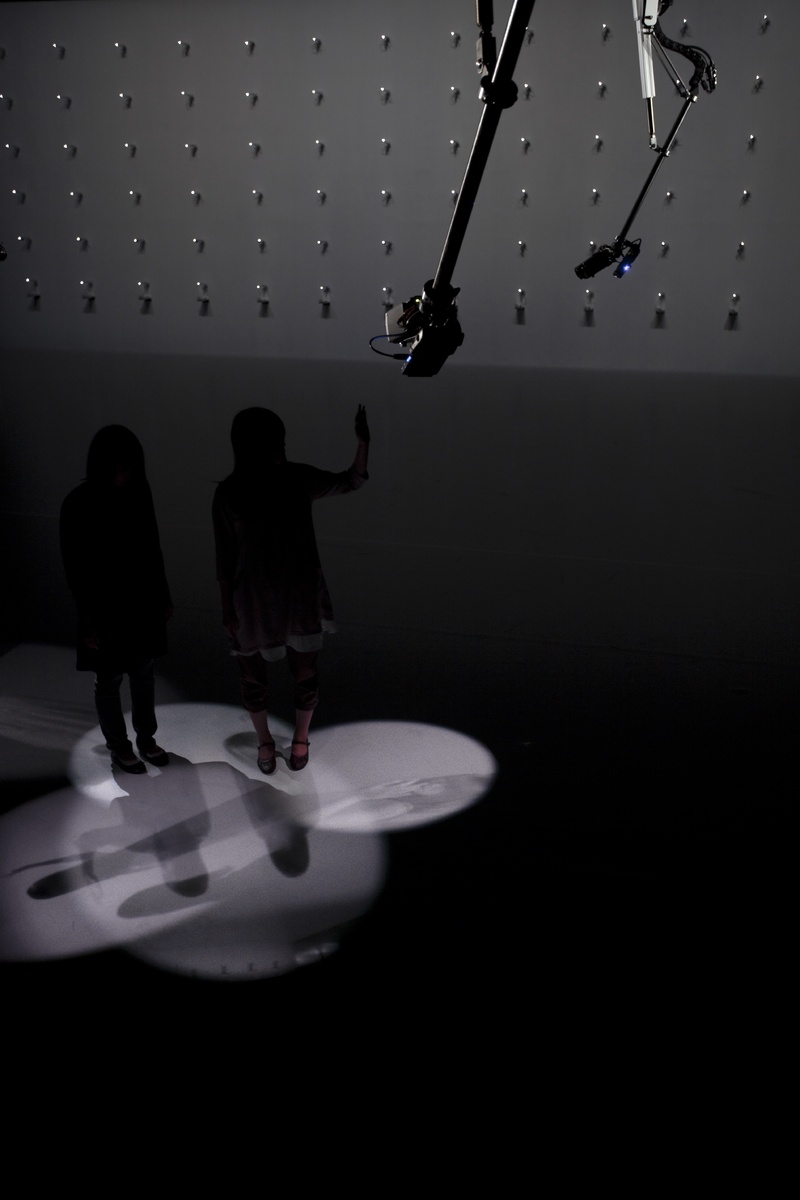 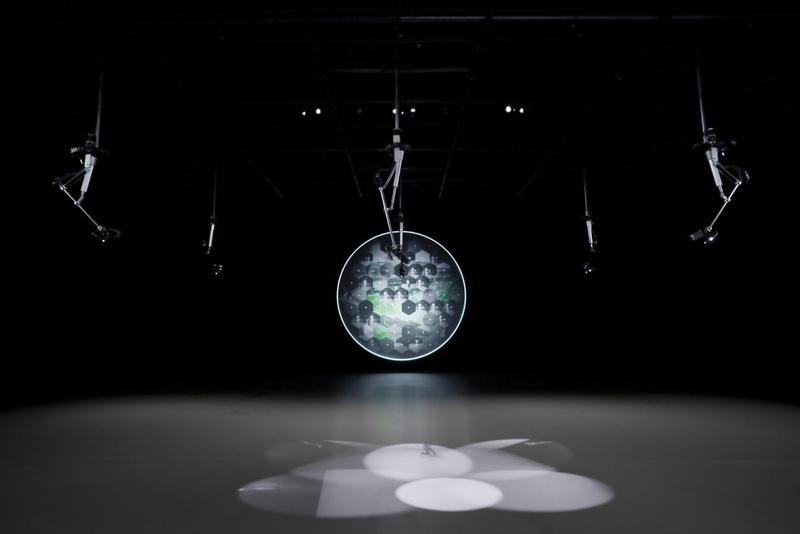 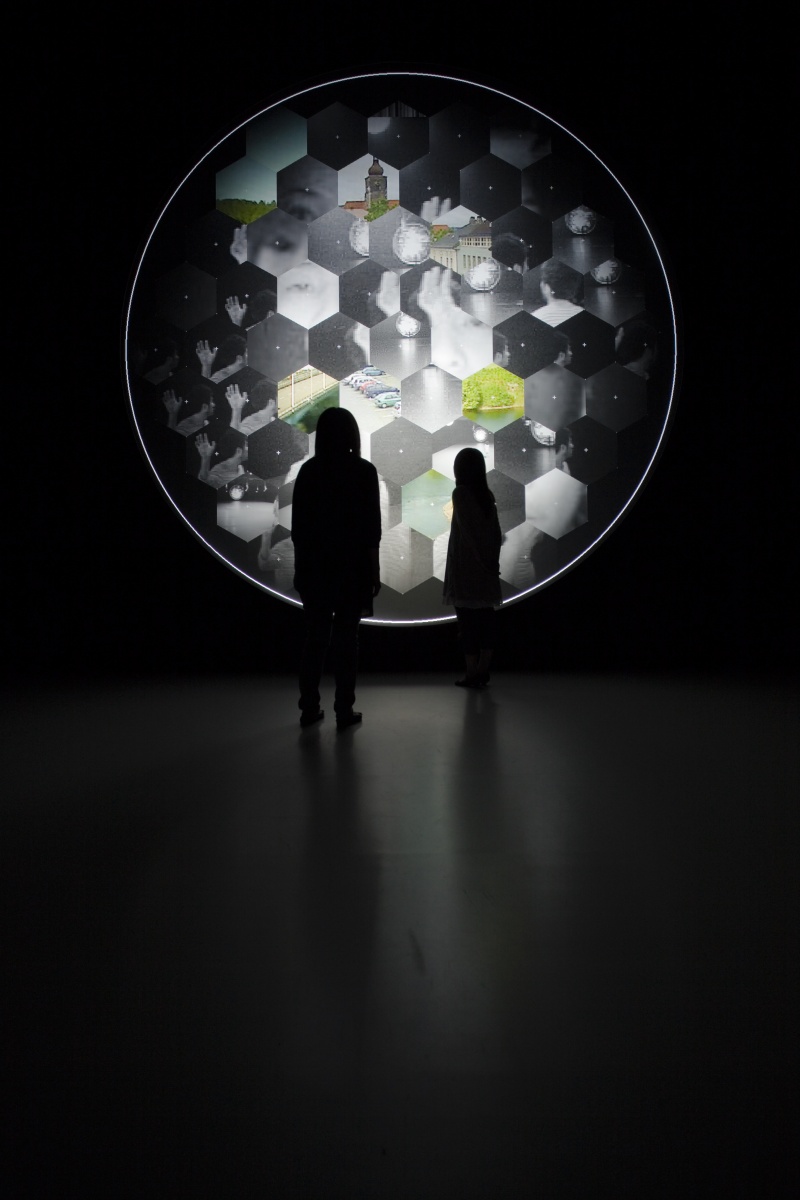 Desires inspired by a system of multiple views and perspectives

A large number of devices resembling tentacles with built-in small cameras are placed across a huge wall ("90 Wriggling Wall Units"), while six robotic "search arms" equipped with cameras and projectors are suspended from the ceiling in the center of the exhibition space ("6 Multiperspective Search Arms") observe and follow visitors with insect-like wriggling moves. Furthermore, a giant round-shaped screen that looks like an insect's compound eye is installed in the back of the exhibition space ("Compound Eye Detector Screen"). Projected onto this screen is a complex mixture of images transmitted from the wall-structures' built-in video cameras, and footage recorded by surveillance cameras installed at various places around the world, stored in the "Desire of Codes" database. In addition, superdirective microphones set up at various places inside the venue pick up voices, machine sounds and other noises in the installation space caused by visitors and by the work itself. Based on the conditions of each of the three parts, sounds are culled from a database of previously recorded audio files, to generate a constantly changing acoustic setting.
The installation's acoustic environment and projections, together illustrating a new reality of fragmentarily recombined aspects of time and space, investigate into contemporary appearances of human corporeality and desire via the visitor as a subject of expression and surveillance at once.

90 devices are exhaustively distributed across a wall. As soon as a visitor enters the area in front of the wall, the devices' heads start blinking, and all together they move in the respective visitor's direction like an insect's tentacles. The mechanic sounds coming from each of the devices create the impression of a wriggling animate organism.
Some of the devices are additionally fitted with highly sensitive miniature cameras able to detect motion and sound beyond human perception. Footage of visitors shot with these cameras is fed together with data of the wall structure's operation into the "Desire of Codes" database that controls the operation of the work as a whole, from where the images are transmitted to the "Compound Eye Detector Screen" at the other end of the exhibition space.

Six robotic "search arms" resembling tentacles of an insect are suspended from the ceiling. Cameras and projectors mounted onto the ends of these arms quickly detect, follow and record the movements of approaching visitors, and simultaneously project the recorded images. Through the looped feedback resulting from the search arms' endlessly repeated input (filming) and output (projection), the visitor perceives "reality" as a repetition of "voids".
Data of the search arms' operation are stored in the "Desire of Codes" database that controls the operation of the work as a whole, and are ultimately reflected in the installation's light and soundscape.

The "Desire of Codes" database is built from images of the exhibition venue (visitors' skins, eyes, hair, bags, etc.) recorded in real-time by the devices on the wall; images filmed five seconds, five hours, and five days earlier; and footage from surveillance cameras in public spaces (such as airports, parks, hallways or crowded streets) around the globe, picked up from the Internet. Images in this database are separated and transferred to the large round-shaped screen resembling an insect's compound eye, where they mix in every single one of the 61 hexagonal cells (facets) that make up the screen. Looking at the constantly changing projected scenery with its shifting time axes, the visitor feels as if watching a segmentalized dream or memories stored in the brain, and discovers the desires that are automatically generated through the act of monitoring. 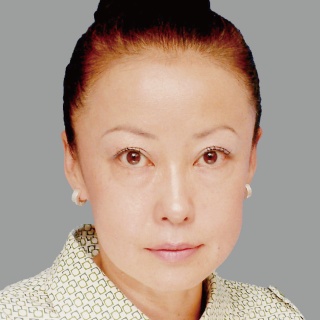 Wonder of Fantasy: The Transformation of Contemporary Image-scape