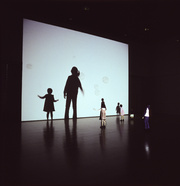 In this interactive installation, visitors can use all of their bodies to play with bubbles in a video.

Projected onto a large screen in the exhibition space are video images of bubbles dancing in a real-looking fashion. When a visitor gets close to the screen, and his or her shadow touches one of the bubbles, the affected bubble lingers, bounces back or bursts.

He studied Fine Arts in a pre-computer era at the Stuttgart State Academy of Art and Design, Germany, and the University of Applied Arts Vienna, Austria. In 1996, he joined the ZKM Centre for Art and Media Karlsruhe, Germany, as programmer and software designer. He was involved in various projects at the ZKM institutes of Visual Media, Music and Acoustics, and Network-Development, such as the Panoramic Navigator and the CD-ROM series artintact and digital arts edition. He taught Interactive Media at Merz-Academy Stuttgart (1997), Hong Kong Art Centre / The Art School (2003) and LASALLE Singapore (2003), and was artist in residence at ARS Electronica Linz, Austria (2001, Small Fish), ZKM (2002, Bubbles), and Institute for Advanced Media Arts and Science [IAMAS] Ogaki, Japan (2003, Obake). His interactive installation works have been shown in numerous international media art exhibitions and festivals in Europe, America and Asia. In 2004, he was appointed Dean of the Faculty of Media Arts at LASALLE College of the Arts Singapore.

Born 1959 in Tokyo. Presently lives in Tokyo and Germany. Studied composition at the Musikhochschule in Berlin and Hamburg, under I. Yun and G. Ligeti. Guest composer and guest researcher at Stanford University, USA in 1991. Was an artist-in-residence at the Zentrum für Kunst und Medientechnologie (ZKM) in Karlsruhe (Germany). Won a Siemens Project Scholarship in 1992 and '93, a North German Radio (NDR) Music Prize in 1994, and numerous other awards. In 2000, "Small Fish Tale" premiered at Ars Electronica (Linz, Austria). In 2001, "Bubbles" was included in the ZKM Collection. Assistant Professor at the Tokyo National University of Fine Arts and Music, Department of Fine Arts / Faculty of Inter-Media Art, since 2000 (associate professor since 2008, professor since 2013).